Fishing to some people isn’t as simple as throwing a line in the water and waiting.

Perhaps once upon a time it may have been that easy, but now days, if you want to catch fish (like I do!); you’re required to be thinking about nearly every action you take.

Tide, ambient temperature, water temperature, time of year, spawning, bait, conditions, weather, moons, sunshine, location, surroundings, snags, structures, banks, lure size, colour, shape, style and depth are just a handful of the myriad of variables you have to consider for each session you have.

Once you have been thinking this way for a while you can often know the species of fish (when fishing blind) before you have even seen it.

The way it bites, the way it strikes, depth, structure, tail kicking, fighting ability, fighting style and approach are all characteristics that after a while you can analyze.

I thought I was reasonably good at this and when trolling for Mackerel by implementing known techniques, it was remiss of me to call a fish for every other species other than a Mackerel-but that’s exactly what I did.

Trolling at 6 knots in a local hotspot I had a bump. Slowing the troll slightly and working the lure erratically it only took a few seconds for the fish to double around and crunch my rapala magnum.

With the huge amount of white bait that had been around all month it has been Trevally ally which feed with fervour on the newly born fry. We hoped that by going deeper and larger with our lures we would get away from pesky adolescent trevors. However, as soon as this fish took the lure-I called it for a Trevally.

Coming almost straight to the boat with no fight or vigor I went as far as calling it for a SMALL trevally as we rolled in the cobalt blue swell above the mark we dubbed ‘Mackerel Mountain’.

The fish took one small surge and then returned to the boat before taking an enormous 145 yard run straight down to the sea floor.

Almost sure that the fish I had hooked had gone the same way as plenty of our fish in the Pibara had (see getting a handle on broome and sharks no longer permitted) I just strapped myself in and hoped.

After another 5 minutes had past and being sure that this fish fighting from directly underneath the boat was either a shark or a black kingfish. Another 5 minutes and finally my gaffsman screamed “it’s a mackerel…and a pretty good one!”. 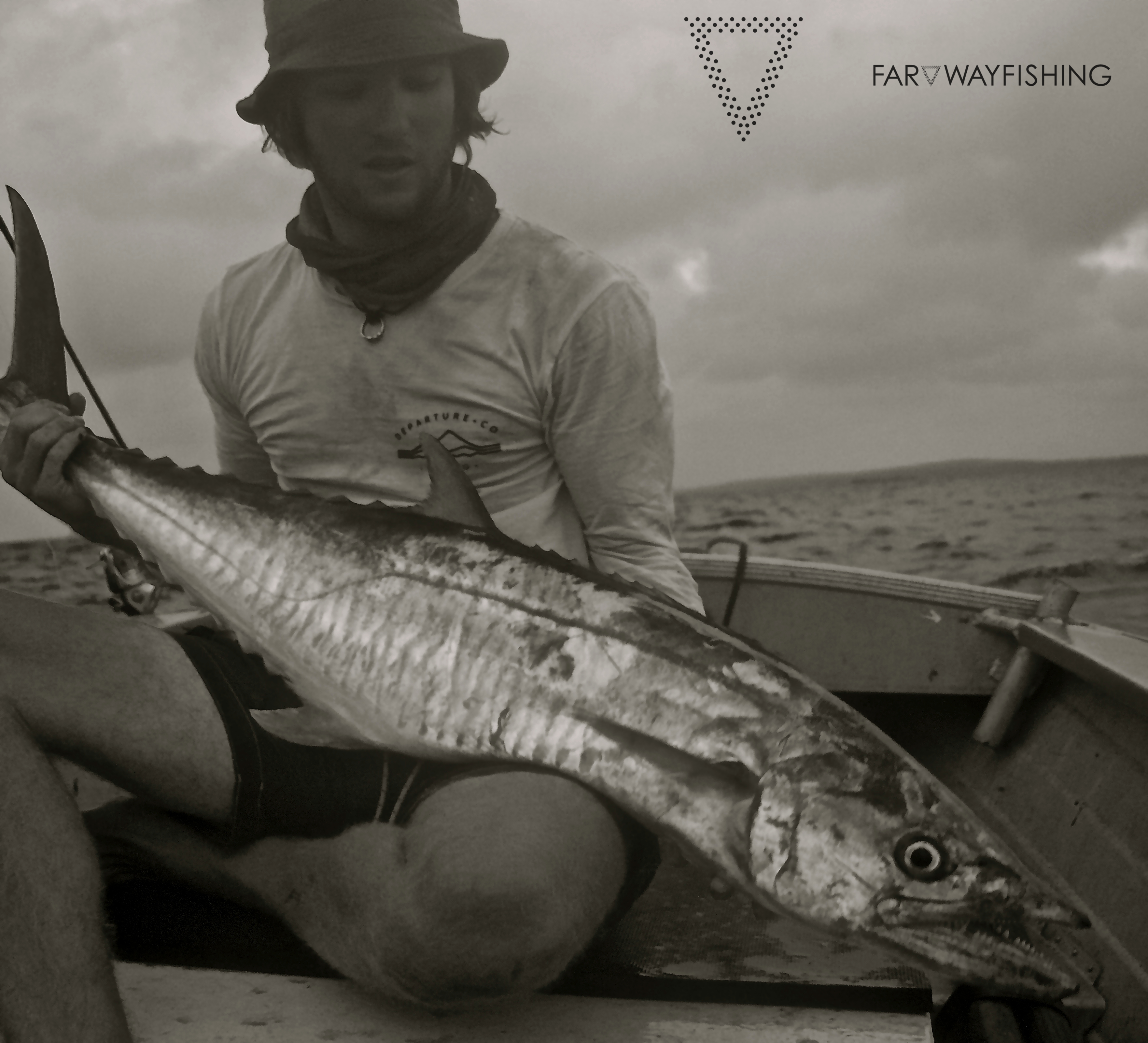 I lead the fish in and Steve sunk the gaff into the fish. I quickly dispatched it and against all my prior judgements I had just landed my personal best mackerel at around 25 lbs on 16 lbs line.

A welcome relief to the freezer as this fish was about to become ginger, garlic soy mackerel!

I suppose in instances like this its important to remember that education is for educations sake and there is always another thing to be learnt or experienced when it comes to fishing.